Muscular lesions are among the most common injuries in sports medicine. How many times, maybe even at the most awkward moment of a tennis match or at the extra time of a soccer tournament, it occurred to you to feel a hard pain in the calf muscle and you tried to resist until to the end of the match, but without being able of moving normally? Or maybe that an opponent performed a studs-up tackle while you were kicking, obliging you to leave the field?

These are the famous muscular injuries that often cause doubts and confusion and that represent some of the most common traumas in sports medicine (around 10-30% of all sports injuries).

Let’s now clarify both the proper definition and on times of recovery that, frankly speaking, is the first thing we think about when we injure: well, when will I be able to return to sports? 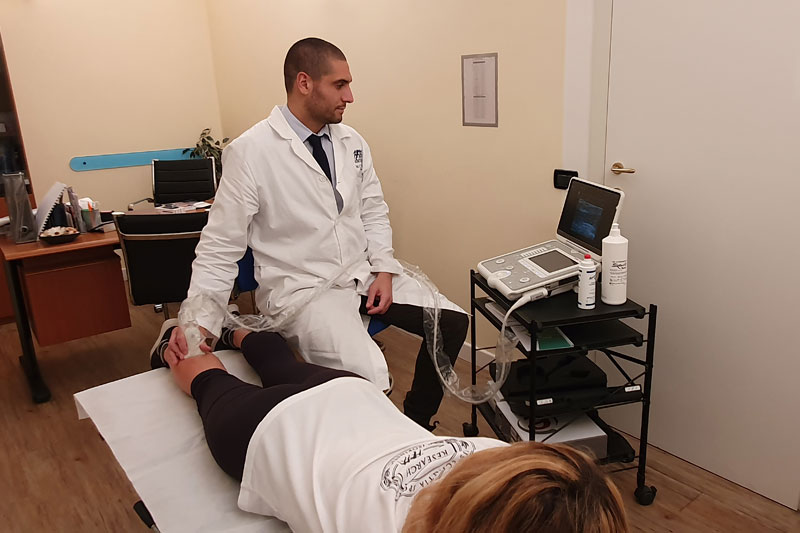 The first point to clarify is that the following instructions are only guide lines, since it is fundamental, always and in every case, to refer to specialists.

Bruises are easy to diagnose, since the athlete can tell immediately the exact moment in which he felt pain, generally after a contact with the opponent or object. In these cases, according to the extent to which muscular pain limits movement, bruises are defined light (when the range of movement is over half of the normal one), moderate ( between half and a third) or severe (when fatiguing moving the limb, less than a third of the normal range of movement). When this is the case, the soonest therapies are started, the soonest athlete can return to sports.

More complex is, instead, the classification and diagnosis of indirect traumas.
If pain is accompanied by the increasing of the muscular tone and it occurs at the end of the sports activity, where it is not possible to relate it to a particular trigger or to localise it, it is usually a muscle contracture or shortening.
On the contrary, if pain is easy to localise, increases during sporting activity and makes playing difficult even if still possible, this is likely to be a strain, characterised by the absence of macroscopic evidence of muscle fibre disruption. In this case, as well, the soonest treatment starts, the soonest is recovery.

The proper lesions or muscular strains (first, second and third degree) are those that need longer recovery times. Here the anatomic lesion is instead always present and its gravity is variable.
Its seriousness is directly proportionate to the quantity of involved tissue, to the haematoma and the injured muscle. It is difficult not to detect immediately the real muscular injury, since the athlete feels a sudden pain, acute, related to a specific technical gesture; the athlete can even point out the zone where injury occurred. The functional impotence is as precocious as the injury is serious.

Diagnosis is essentially clinical, but it is aided by MRI prescribed 24/48 hours after the trauma. Ultrasound scans can be repeated throughout rehabilitation to keep the outcome under control.

In the treatment of this type of lesion it is fundamental the anamnesis not only to frame the injury but also to see if there were other episodes in addition to the first (relapses) or if there were already established relapses. The exact diagnosis after ultrasonography (contracture, stretching, tearing the 1st, 2nd or 3rd grade) will guide the prognosis and the therapeutic procedure.

It will also be important to evaluate predisposing factors (ipoextention at the level of other muscle groups, imbalance, vertebral blocks, functional overload), positivity to malocclusal kinesiological test for diseases.

In this occasion we will speak of the treatment of the tear of the biceps femoris, fairly frequent occurrence in athletes. During the acute phase, in the first moments after the traumatic event it is necessary to stop the bleeding through compression bandages and ice; then after the ultrasound examination and diagnosis you can begin rehabilitation treatment by controlling the pain with physical therapies such as laser, tens endorphin and then ultrasound, and recover the articularity (negative stretching) through stretching and relaxation exercises. It is useful to start from the beginning with aerobic activities permitted, without pain and gradually increase the intensity and variety of the stimulus. When stretching is negative and there is tenderness to palpation you can start muscle recovery of the district concerned first in concentric but basically eccentrically to elasticise the scar and improve muscle extensibility; at the same time we will work to eliminate any compensation through a work of global muscular strengthening of the core muscles, quadriceps, gluteal and calf.

Ended this phase you must necessarily conclude the rehabilitation program in the field to return to running and test complex movements such as changes of direction, shots and braking: it is fundamental for the prevention of recurrence to have a home exercise program to maintain functionality and extensibility of the muscle.